Recently we have seen that the Chinese Alcatel OneTouch launch an intermediate with Windows 10 Mobile, with a model called Fierce XL. The name apparently will be a standard for phablets with the platform, since we also have the Lumia 640 XL and the Lumia 950 XL adopting this type of nomenclature, which indicates that a “Fierce” could be launched by the company some time later.

Although the very Alcatel OneTouch has confirmed the development of a smartphone with Windows 10 Mobile, we had not seen any machine’s image so far, something that has just changed to a tweet from the famous Evan Blass responsible for Evleaks profile. According to the rendering released by Blass, the device is also sold in a version with Android, with both editions focused on the US carrier T-Mobile.

Something interesting is that smartphones will have capacitive buttons below the screen, going against the tide of what the developers own systems make their lines Nexus and Lumia. This can suit those who prefer keys off the display, but makes use of is seen a smaller frontal area than would the use of a virtual navigation bar. 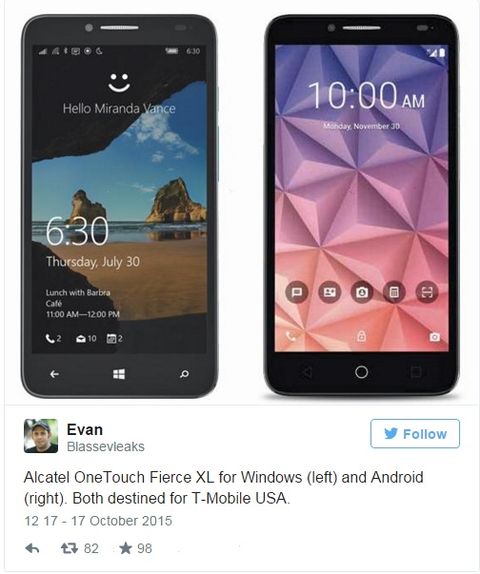 According to Evleaks, both models will have exactly the same hardware, which can be highlighted:

There is no information on pricing or availability, and expected that the Alcatel OneTouch Fierce XL reach the market later this year to take advantage of Christmas promotions.