Early the following year, Xiaomi must finally enter the field of 64 bits. The fact is that every day we have new rumors about the different terminals being developed by the Chinese manufacturer even the Xiaomi Mi5, which should be the top model of the brand.

According to recent rumors, Xiaomi be ready to launch two new devices on the market, which should arrive for the mid-range market. Today we learned other features thanks to a benchmark, where as usual, the information we have is very reliable. 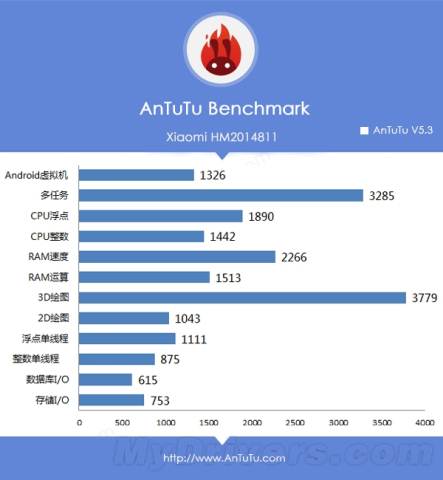 The first would be a super cheap phone, which is offered at a price of around 65 euros, and the other is the protagonist of the information that we present in this article that has appeared in the benchmark. As we see, this smartphone would be the successor of Redmi 1S.

Specifically, this information successor Xiaomi Redmi 1S appeared in AnTuTu; Named in HM2014811 code. Below you can see images of which I speak. Here are the technical characteristics of this terminal.

The version shown in Antutu test test should correspond to China Unicom 4G (which is compatible with European networks), and supports GSM, WCDMA, FDD-LTE and TD-LTE. To complete the picture we also have a 2 megapixel front camera, rear 8 megapixels, Android 4.4.4 Kitkat and 2200 mAh battery. 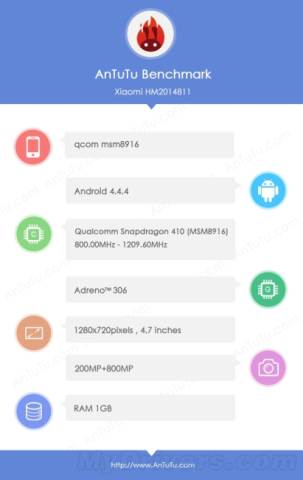 Thank TENAA we could also know that the size of this device Xiaomi, successor of Redmi 1S is equal to 134 x 67.2 x 9.2 mm. Among other features, we also have 8 GB of internal memory, expandable via microSD. We do not have more information. So we’ll just wait for the next rumor, we are confident that they will soon.