It seems that the higher range (compared with Redmi 1S and Redmi Note) Xiaomi the Mi4 is not getting the success that was expected in India, or Xiaomi just wants to please users of that country as this phone in its 16GB version is available for purchase without any registration from today in India. 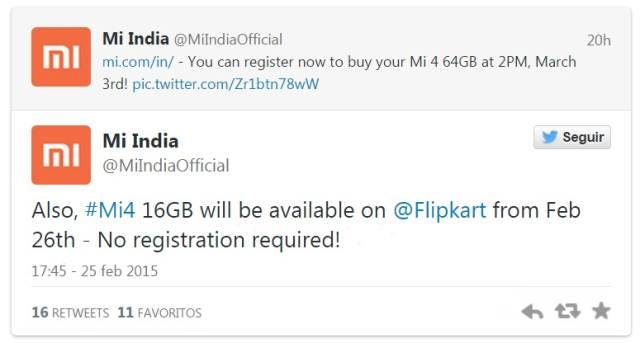 This smartphone features a Full HD 5-inch screen; a processor signed by Qualcomm, specifically the chosen model is the Snapdragon 801, together with 3 GB of RAM, a 13-megapixel rear camera, a front 8-megapixel camera and a removable battery 3080 mAh. Besides the Xiaomi Mi4 has a series of interchangeable covers wood of which I spoke yesterday.

The only differences between the Xiaomi Mi4 16GB and OnePlus One sold in India, is a smaller screen, lack of support LTE in the Mi4 and a price smaller in the case of OnePlus One.