According to the CEO LeTV, many users find it convenient smartphone, which can be used with one hand, must have a display 4,7-5,3 inches, when, for example, 5.5-inch iPhone 6 Plus is already too big. But it does not necessarily equip a large display smartphone while doing another huge body.

On the market there are plenty of such examples, such as 5.9-inch Huawei Mate 7 as the average size of 5.5-inch smartphone. In general, the CEO LeTV hints that their novelty will receive a large display and yet remain comfortable. Well, in confirmation of this look at the teaser smartphone LeTV, this has virtually no side frames, and in the top of the Off-screen area is minimal. 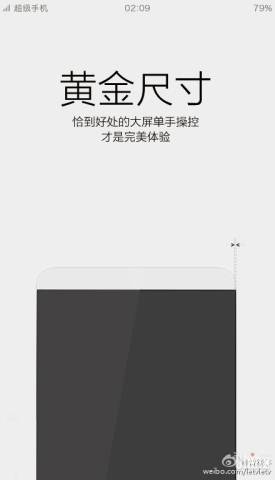 According to rumors, the smartphone LeTV premiere in March may be even a few novelties. Recall about a month ago LeTV introduced its own mobile OS based on Android, and not only for smartphones and tablets, but also for cars.