Alcatel One Touch capitalizes on one of its most successful smartphone, both Idol 3 marketed in recent months. The brand has just announced a colorful variation, which takes the name of Idol 3C.

Present at IFA as every year, Alcatel One Touch went there with some smartphone models. The completely new terminal there was also quite rare, since we had to settle for a new range GB leveraging impact resistance and water. Otherwise, a new Pixi some Pop in the entry level … and a new version of its successful year, Idol 3.

This smartphone that had convinced us in its version 5.5 inches (slightly better equipped in terms of display and SoC its 4.7-inch counterpart) is now available in a version of 3C. And for the occasion, the Chinese brand does not seek a revision of the features of the two phones, but rather slight aesthetic changes, even tariff. 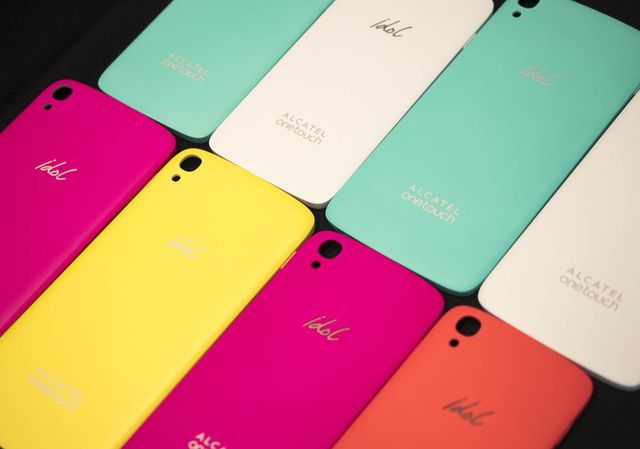 What must be remembered is that the Idol 3C 5.5 inches retains the features of its predecessor, namely its 1080p screen in which we find a SoC Snapdragon 615 and JBL speakers to keep phone in any direction. However, its unibody enclosure (plastic) now gives way to colorful interchangeable covers. Alcatel One Touch customization setting the price of a small drop in speed in terms ofappearance, since the beveled slices of Idol 3 bartered in the Idol 3C their chrome finish, rather premium, against the flat sides and a plastic look a little less quality. It must be said that the white, red, fuchsia, yellow or pastel green rarely contribute to an aesthetic high-end, but orient the phone directly to a younger target. Its price remains the same, that is to say set at 249 euros, for release by December 2015 or January 2016.

In contrast, the 4.7-inch version of the Idol 3C loses some of its attributes. He also tricked interchangeable colored shells and it ignores the JBL speakers and headphones to ensure a small price reduction. Its European price thus increases from around 250 euros to 229 euros.