Just a couple of years ago, tablets with operating system Windows were exotic, but now they are used by professionals and people who prefer a handheld device instead of a computer or even a laptop.

Therefore it is not surprising that today many well-known and not so well-known manufacturers are trying to take the place of a young category in tablet market. Recently we wrote about 10-inch tablet Chuwi Hi12. Now a leading Korean manufacturer is preparing to release its next 12-inch tablet Samsung on Windows 10.

In addition, the fact that the device has been certified in communication organizations means that the tablet is ready for official release.

What can we expect from the new Windows tablet Samsung? 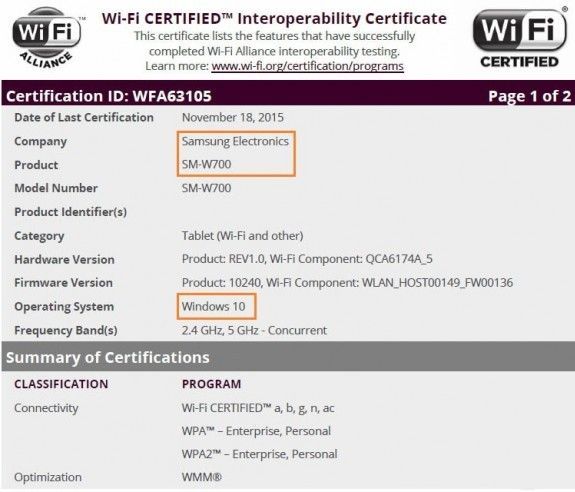 According to Sammobile, the technical characteristics of the Samsung SM-W700 will include 12-inch screen with a resolution of 2560 x 1600, and perhaps even 3840 x 2400 pixels. Also 12-inch tablet Samsung will have one of the latest processors Intel Core M that will work with 4GB of RAM.

Similar to its competitors, 12-inch tablet Samsung will receive built-digitizer for use with an active digital pen S Pen, which will be able to recognize the force of pressing the screen.

Indian imports/exports site Zauba reports that the price of the new tablet Samsung will be about $450.

The announcement of 12-inch tablet Samsung may be held next week at CES 2016, which traditionally take place in Las Vegas.