It was in the third quarter of last year, when OnePlus officially will unveil the OnePlus 2, successor to the flagship killer 2015. Knowing that we are already late May, there is nothing surprising in the fact that the first information about the device begin to surface. So after a first appearance on Geekbench, now it has again been spotted on another benchmark tool.

In midweek, a first benchmark revealed the presence of a Snapdragon 810 processor with his GPU Adreno 430 and 3GB of Ram. Today, the Chinese site Ludashi confirms this information and brings us news including screen OnePlus 2 which would still be Full HD 1080p.

Great news for users disappointed builders sink one after another in the bidding Quad HD. Unfortunately, the screen size is not given. Difficult to imagine OnePlus propose a smaller screen, however knowing that 5.5 inches is already large for a smartphone, the Chinese manufacturer could very well keep the same diagonal while optimizing the ratio terminal size / size of screen.

Regarding the picture part, we would find a back sensor 13 Megapixels and a front camera of 5 megapixels, the same thing last year. This does not mean that it will be the same sensors. Same since the storage side always end up two options 16 and 64 GB, unfortunately without SD slot, as recently confirmed OnePlus and without removable battery. 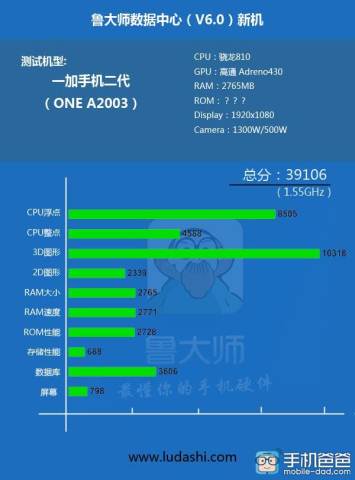